The Severinghaus Lab has recently developed a dissolved noble gas extraction system for the goals of (A) reconstructing past water table depths from measurements of stable isotope ratios of Ar, Kr and Xe in paleogroundwater samples (see Seltzer et al., 2017 for more information), and (B) developing these isotope ratios in seawater as tracers of ventilation during deep-water formation. Below you’ll find an overview of the system and descriptions both of current experiments underway and planned work.

This work is the thesis project of Alan Seltzer and is supported by NSF Award #1702704.

Our new system enables quantitative extraction of dissolved gases from two to five-liter water samples by sparging with ultra-high-purity helium gas. Over 90 minute extractions, helium gas is recirculated through the system, carrying dissolved gases into a stainless-steel diptube submurged in liquid helium in which all gases besides helium and hydrogen are trapped. The collected gases are gettered for 90 minutes at 900 ⁰C using SAES Zr/Ar getter sheets before being measured at high precision for isotopes ratios of Ar (40/36, 38/36), Kr (86/82, 86/83, 86/84), Xe (136/129, 134/129, 132/129), and for the bulk dissolved concentrations of Ar, Kr, and Xe. Isotopic measurement precision (1σ) for 2-L samples is ~0.005 ‰/amu for Kr and Xe isotope ratios as well as 40/36Ar ratios. Bulk gas 1-σ precision ([Ar], [Kr], and [Xe]) is ~0.35%.

The system, configured for 2-L samples, has recently been used to make the first measurements of Kr and Xe solubility fractionation factors (i.e. isotopic solubility ratios) in fresh water and filtered seawater collected from the Scripps pier. Ar isotopic solubility fractionation factors have also been determined, and gas-exchange experiments to estimate the kinetic fractionation factors for Ar, Kr, and Xe isotopes were recently completed. We have also recently completed measurements of these isotope ratios in 36 groundwater wells from across the state of California as well as in seawater samples collected from the surface to seafloor at station ALOHA near Oahu. 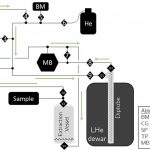 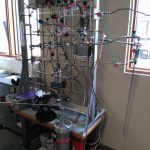 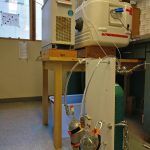 The first round of lab experiments to determine solubility and kinetic fractionation factors in water has wrapped up, but various experiments are still ongoing.

Curious what we’re up to in the lab? An Arduino-based monitoring device uploads water temperatures from the top and bottom of the equilibration vessel as well as water surface air temperature, humidity and barometric pressure every 2.5 minutes.

Using dissolved Kr and Xe isotopes in groundwater to quantify past water-table depth:

Because Kr and Xe isotopes dissolved in groundwater are inherited from air above the water table (in what’s called the unsaturated zone), the fractionation of dissolved Kr and Xe isotopes relative to the atmosphere only happens in two steps: 1) within the unsaturated zone before dissolution into groundwater at the water table, and 2) during dissolution and the associated injection and fractionation of excess air. In the unsaturated zone, gravitational settling dominates all other fractionation mechanisms, leading to an increase in heavy-to-light Xe and Kr isotopes that scales nearly linearly with depth (see figure below, adapted from Seltzer et al., 2017). During dissolution, solubility fractionation leads to a further increase in heavy-to-light isotope ratios while injection of excess air does the opposite, but typically only by a very small amount that depends on the specific excess air model applied. Because solublity fractionation of Xe and Kr isotopes is largely insensitive to recharge temperature, it is the signal of gravitational settling – again, a nearly linear function of water-table depth – that is responsible for nearly all the variability of Kr and Xe isotope ratios dissolved in groundwater. 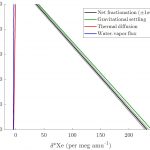